Michael Owen Injury Not As Bad As Feared,Says Sir Alex 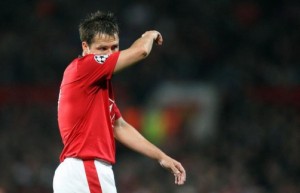 Great news for all Manchester United fans Sir Alex Ferguson has confirmed that Michael Owen should be fit for the club’s Premier League match against Bolton at Old Trafford on October 17.

It had been feared Owen would be missing for a minimum of three weeks after limping out of United’s Champions League win against Wolfsburg on Wednesday with a groin strain.

However, Ferguson has revealed the damage is not quite as extensive as he had first feared, meaning the 29-year-old will only miss Saturday’s clash against Sunderland.

Sir Alex told reporters that he expects Owen to be available for the next game and that it certainly will not be a lengthy lay off.

The manager also added that he is quite pleased with how everything turned out. He also said that obviously it is understandable that precautions needed to be taken given Owen’s past history but said that there is nothing to worry at the moment.

Ferguson also revealed that Edwin van der Sar and Rafael Da Silva were both nudging towards full fitness after a broken finger and shoulder surgery respectively, although neither man is in contention to face Sunderland at Old Trafford on Saturday evening.