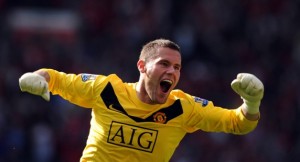 United manager Sir Alex Ferguson’s team selection at Stoke will be the subject of much attention with Michael Owen, after his last-gasp winner against Manchester City at the weekend and a lively display in the League Cup win over Wolves in midweek, pushing for a starting slot alongside Wayne Rooney.

However goalkeeper Ben Foster’s status as first-choice back-up for the currently-injured Edwin van der Sar could also be under threat following a midweek display from Tomasz Kuszczak that contrasted with Foster’s nervy performance in the derby.

Regardless of their line-up, Stoke midfielder Rory Delap believes that his team is capable of upsetting United at the Britannia Stadium, although he expects the champions to overhaul Chelsea over the course of the season.

Delap added that he cannot see past them as they have the experience of doing it. He also said that United have lost a couple of good players but have replaced them with good players.

Delap added that he hopes that Stoke can put a bit of a dent in United’s run on Saturday.

The midfielder said that Stoke can do that if the team play their own game and concentrate for the full match.

He added that if Stoke switch off for a second United will pounce to punish.