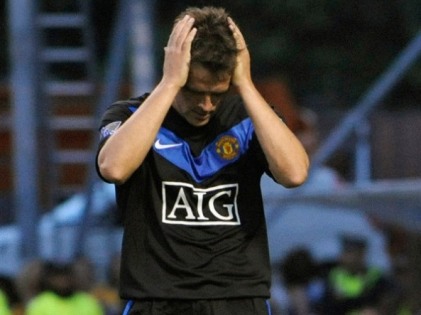 Manchester United striker Michael Owen is set to miss out on an England call again.

England manager Fabio Capello names his squad on Sunday for the Wembley friendly against Slovenia on Saturday week and the World Cup qualifier at home to Croatia four days later but Owen, age 29, remains an outsider for a place despite netting his first goal for Manchester United in last weekend’s 5-0 win at Wigan.

It is believed that Capello is planning to only pick just four strikers, with Wayne Rooney, Emile Heskey, Carlton Cole, and Jermain Defoe all well ahead of Owen.

The England boss is not expected to be at Old Trafford to watch Owen, if he plays against Arsenal in the Premier League clash on Saturday.

However the Italian is set to take in Portsmouth’s clash with Manchester City on Sunday to run the rule over defender Joleon Lescott and goalkeeper David James.

It is said that Capello wants to be sure keeper James is fully fit after leaving him out for the 2-2 friendly draw against Holland.

Rio Ferdinand’s thigh injury could give Lescott a chance to push his international claims now his £24million move from Everton to City is finally complete.