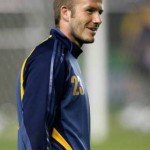 LA Galaxy star midfielder David Beckham has said that the MLS needs more top international players to make the next leap to the next level.

Beckham told a local newspaper that ideally, he would bring in more international players to the MLS scene but the wage cut these players would have to take will make it difficult. Beckham however said that the wage issue will have to change at some point.

Beckham also added that he is committed to MLS and soccer in the country and he definitely wants to prove that by owning a team and having an amazing experience.

He added that he has it in his contract to demonstrate how serious he is about it.