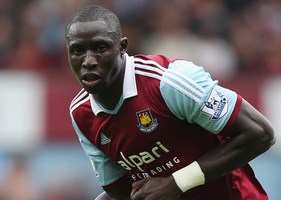 The Senegal international is keen to to open talks with West Ham over a new contract that will see him at the club for their move into the Olympic Stadium in 2016.

The 26 year old told the Daily Mail : “I imagine myself at the Olympic Stadium but it’s 2016 and I hope to sort my contract as soon as possible to make sure I play there,”.

“With the transfer window we will start to talk, at the moment we are not talking. I hope it as soon as possible.”