Nani Look To Ronaldo For Inspiration 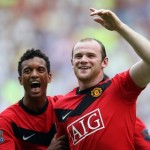 Manchester United winger Nani has revealed that he will ask old pal Cristiano Ronaldo for advice to help put his Stoke horror show behind him.

The Portuguese winger had an awful afternoon at the Britannia Stadium with Manchester United looking much stronger after he was subbed off.

It was said that Stoke fans taunted Nani with chants of ‘You’ll never be Ronaldo’ and he was hooked by boss Alex Ferguson early in the second half. Then his replacement Ryan Giggs inspired a 2-0 win.

It is now said that Nani will call Ronaldo before Wednesday’s home clash with Wolfsburg and said that he and Ronaldo keep in touch a lot.

He added that they speak about their own game and that Ronaldo gives him confidence to go out and perform.

Ronaldo also recently said that Nani is an excellent player and that he sure that in a few years Nani will be among the best players in the world.