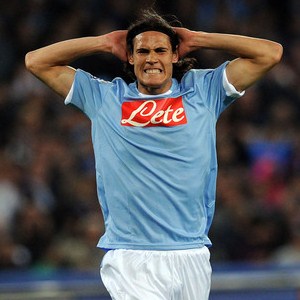 Napoli failed a big test of their Serie A title credentials as they lost 2-1 at home to Udinese to pave the way for AC Milan to clinch the Scudetto.

The hosts needed to win at the Stadio San Paolo to make it a two-horse race for the title after Inter Milan slipped up on Saturday, but they instead remained six points adrift of the league leaders with five games remaining.

Udinese, who won thanks to goals from Gokhan Inler and German Denis, boosted their own chances of qualifying for the Champions League next season by reducing the arrears on fourth-placed Lazio to just one point.

Edinson Cavani had a penalty saved in the dying stages of the match after Maurizio Domizzi was sent off for Udinese, before Giuseppe Mascara scored a consolation deep into stoppage time.