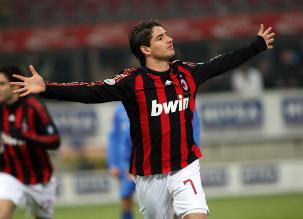 Napoli salvaged a remarkable draw thanks to Luca Cigarini’s 90th-minute volley and German Denis’s stoppage-time header after Milan had led from the sixth minute with strikes by Filippo Inzaghi and Alexandre Pato.

Milan are now joint fifth with 16 points alongside Genoa, who beat Fiorentina 2-1 at home, while promoted Parma climbed to fourth on 17 with a 2-0 home win over Bari.