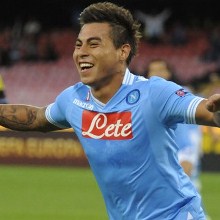 Eduardo Vargas struck a superb hat-trick as Serie A side Napoli got their Europa League Group F campaign off to a flying start with a 4-0 victory over AIK in Italy.

The 22-year-old Chilean striker opened the scoring in the sixth minute to set up a stunning solo show which was then rounded off by Blerim Dzemaili’s fourth for his side in injury time.

But it was not all good news for Walter Mazzarri’s men, who had substitute Marek Hamsik sent off in the 74th minute for a violent reaction to a foul from AIK’s Nils-Eric Johansson.