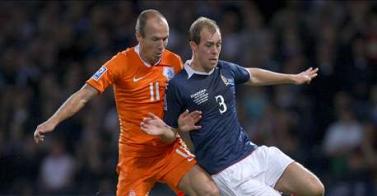 An 82nd-minute goal from substitute Eljero Elia saw Netherlands end Scotland’s hopes of qualifying for South Africa 2010 with a 1-0 win at Hampden Park.

Elia broke away eight minutes from time to squash Scottish hopes that had earlier been raised, particularly during a first half in which Kenny Miller twice came close to giving George Burley’s side a merited lead.