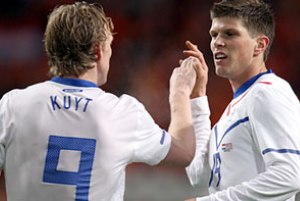 Kuyt opened the scoring from the spot five minutes before half-time after Wesley Sneijder was fouled and substitute Huntelaar made it two with a deflected strike in the 73rd minute.

There was something for the Americans to cheer as captain Carlos Bocanegra grabbed a late consolation goal, their first against Holland.