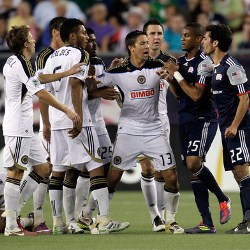 The Philadelphia Union took over at the top of Major League Soccer’s Eastern Conference on Sunday night thanks to a convincing 3-0 win away to the New England Revolution.

First-half goals from Carlos Ruiz and Carlos Valdes put the visitors in control early on, and Sheanon Williams sealed the points on the stroke of full-time after the hosts had had Benny Feilhaber sent-off midway through the second-half.

The result lifted the Union two points clear of the New York Red Bulls, who were held to a 0-0 draw at Chivas USA on Saturday night, and also kept the Revolution rooted to the bottom of the Eastern Conference.

Xavi : We Must Leave Cesc Fabregas In Peace