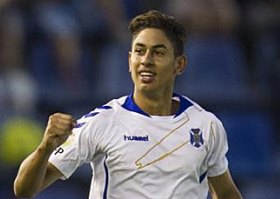 Reports are out claiming that Newcastle United have opened talks with Tenerife for striker Ayoze Perez.

The Daily Mail reported that negotiations have now commenced between the two clubs.

The 20-year-old has been watched by the likes of Real Madrid, Manchester City, Arsenal, Everton and Swansea over the past 12 months and is considered a forward of good potential having scored 16 goals in 29 games this season in the Spanish second division.