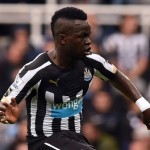 The Newcastle Echo reported that the Ivory Coast international was strongly linked with a move in the summer. And United manager Pardew admitted the interest from an unnamed club, which had a bid rejected, had “unsettled” the midfielder.

Pardew is braced for more interest in Tiote in January’s transfer window.

But he is adamant that United are not looking to cash in on the 28-year-old.