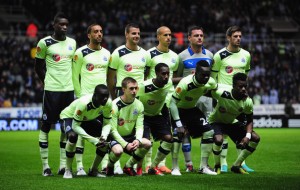 This time last year Newcastle were flying, they were  7th in the league and not to far away from a Champions League position. The Tyneside club were in the process of signing prolific Senegalese striker Papiss Cisse, had Demba Ba firing on all cylinders and playing a nice brand of football.

A year on and Newcastle are in big problems. They are in 16th place just two points off the relegation zone, were dumped out of the FA cup by Championship side Brighton and have just lost star player Demba Ba to Chelsea for a smallish fee of £7 million.

Just where has it all gone wrong for Newcastle?

Injuries: The Magpies last season had a very good starting eleven, but they were helped by the fact they did not have many injuries. Key players like Hatem Ben Arfa, Yohan Cabaye and Fabricio Collocini played most games  and were at the heart of Newcastle’s success. However beyond their first eleven there is not a lot of  strength in depth. Players like Shola Ameobi, James Perch and Gabriel Orbetan have all played there fair share of games this season and whilst they do put in a shift, they lack the quality needed in The Premier League.

Papiss Cisse:  The ex Freiburg man was outstanding last campaign, scoring 13 goals in 14 games including the goal of the season at Stamford Bridge. This year he’s been put on the right wing where he has had far less success, scoring just 4 league goals. Not only that but he’s contributing very little to the play and looks a lost figure at times.

Alan Pardew: Was one of the managers of the season last year, no one expected him to achieve what he did with Newcastle and his signings were spot on. However In the Summer of 2012  Pardew brought in Vernon Anita, Romain Amafilitano and Gael Bigirimana who have not had the same impact that his purchases last season had. Furthermore his tactics have been questionable. He has opted to play one upfront and have three in central midfield but despite this they look overrun in the middle of the park, with the three men not protecting their back four. They have conceded 39 goals: the fourth worst in the division. Pardew was given a massive eight year contract in September but is coming under increasing pressure from Geordie fans.

The false representation of last season: Finishing 5th last year and two points off the Champions League spot was an outstanding achievement but it was also a false representation of where they are at. Newcastle should be a side looking to finish in the top half of the table, lets remember this time three years ago they were in The Championship.  Without doubt they are performing below what they are capable of but it would be naive to think that this is a side that should be challenging for the top 4 places regularly: they are a level below those teams.

Hope for the rest of the season: In spite of the fact they have sold Demba Ba, Newcastle will have to move on and lets not forget that they do have a striker in Cisse who is capable of scoring goals at this level. Now Ba’s gone he may have the chance to play in his preferred striking position. They are also active in the transfer market and have already signed talented French fullback Mathieu Debuchy. On top of this they have important players like Hatem Ben Arfa and Yoan Cabaye coming back from injury who they will need to help steer them away from relegation.

Arsenal and Man Utd Battle it Out for €14m Zaha