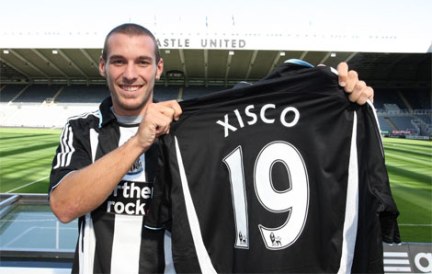 More transfer news is out and it has been reported that Spanish misfit Xisco has joined Racing Santander on loan after 12 miserable months at Newcastle and it is reported that the 23-year-old has clinched a season-long deal to return to his home country, after passing a medical.

Xisco, a Spain Under-21 international, managed only nine senior appearances for Newcastle, five of them as a substitute, and scored just one goal and that strike came in a 2-1 home defeat by Hull on September 13 last year, the day fans staged mass protests against owner Mike Ashley and his regime following Kevin Keegan’s departure nine days earlier.

Keegan, who is still engaged in legal proceedings against the club over his exit, resigned in protest at the way the recruitment drive had been handled. Having reluctantly agreed to James Milner’s sale to Aston Villa, the manager was dismayed to see only Xisco and loan signing Ignacio Gonzalez arrive on the final day of the summer transfer window, neither with his approval.

Xisco is understood to have cost the Magpies around £6million, and was handed a five-year, £50,000-a-week contract, while Gonzalez, who was injured for most of his time on Tyneside, made only two appearances as a substitute.