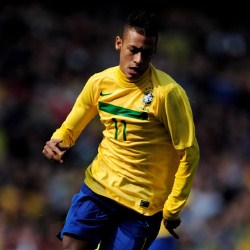 Brazilian football sensation Neymar has admitted that he is flattered to be linked with a move to Real Madrid but insists no decision has been taken about his future.

The Santos starlet, now age 19, is a key target for the Spanish giants this summer and it was reported in Spain recently that a deal had been done to take him to the Bernabeu.

However, though he has a release clause of 45 million euros inserted into his contract, Neymar remains a Santos player and played in the first leg of the final of the Copa Libertadores, which finished 0-0 with Penarol.

Though speculation of a move to Spain pleases the forward, he is adamant his future remains undecided.

Neymar told AS : “It is flattering to know that Madrid like me but nothing has been agreed yet,”.

The youngster has also been linked with Chelsea this summer after emerging as one of global football’s biggest talents.