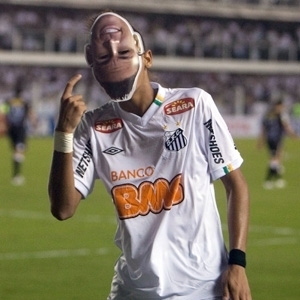 Brazilian wonderkid Neymar was sent off in the most bizarre way during the match between Santos and Colo-Colo.

Having already been booked, the Brazilian international striker scored a fantastic solo goal and celebrated by picking up a mask of his own face that was left by the side of the pitch.

The referee however was not impressed with the celebration and showed Neymar the red card.

Only recently Neymar found himself in the middle of an international football controversy when he claimed that Scottish football fans threw a banana at him in an act of racism.

It looks like Neymar is beginning to attract a lot of negative media nowadays. Definitely not a good thing for an exciting young talent.