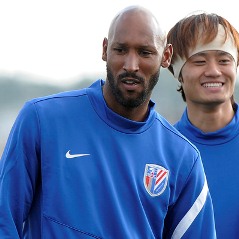 Nicolas Anelka has indicated that his former Chelsea strike partner Didier Drogba will be joining him at Shanghai Shenhua.

The Frenchman left Stamford Bridge to join the Chinese Super League club in January and there has been much speculation regarding Drogba following suit.

Anelka recently said that he would love to have the Ivory Coast veteran alongside him at Shanghai and suggested that a move is a distinct possibility.

“I personally would like to see Drogba join Shanghai Shenhua,” Anelka said in French, which was translated into Chinese and then into English.

He added: “Yes I am frequently in contact with him. I think Drogba should be joining us, if all goes well, but that is not my position to announce.”