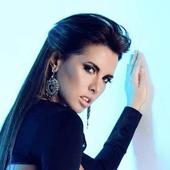 Nives Celsius is at it again, after causing a storm by admitting that she “scored” with her husband Dino Drpic n the centre circle of a pitch, weeks before Croatia beat England 2-0 in a Euro 2008 qualifier.

And now, the sexy brunette has recorded a song called ‘Goal’ as a tribute to her fellow WAGs.
One of the more suggestive lyrics of the record urges players to “fill me like Ronaldo”.
Nives later sings: “Goal, goal, goal, score me a goal. I’m naked, you are naked, score me a goal.
“Be my Torres Fernando, keep filling me like Ronaldo and shake me my little Messi.”
Nives told the Croatian Times: “I am just telling the truth about footballers and the women who follow them.”