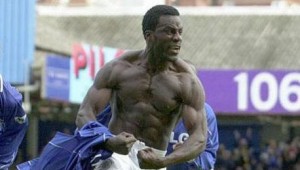 Magpies chief Peter Trembling confirmed yesterday that Ade Akinbiyi will join be joining the club, subject to a medical.

He also said that Ade is the only signing the club is targeting at the moment.

Notts County suffered a setback recently when veteran defender Sol Campbell left the club claiming that the League Two club did not fulfill the promises of big signings it made to him.