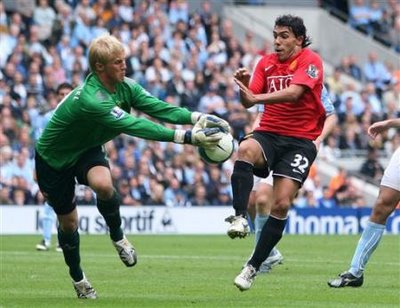 Interesting transfer news are out and it has been reported that Notts County have made the first big-money signing of the Sven-Goran Eriksson era by reportedly smashing their transfer record to sign Manchester City goalkeeper Kasper Schmeichel.

The 22-year-old son of former Manchester United’s legendary goalkeeper Peter Schmeichel played under Magpies director of football Eriksson at Eastlands and has now moved to Meadow Lane for a fee which is believed to eclipse the £685,000 they paid to buy Tony Agana from Sheffield United in 1991.

Manager Ian McParland told the club’s official website, www.nottscountyfc.co.uk that the club is very pleased that Kasper has chosen to come to Meadow Lane.

He also added that Kasper is a significant part of the jigsaw puzzle that the club is trying to complete before the transfer window closes and that Notts County is looking forward to strengthening the team further in the next couple of weeks.

Schmeichel also said that he is very happy to sign with a club with such a long and rich history and such great support and that he is joining a very ambitious team which is building for the future and it is a very exciting time for everyone.

He also said that he is looking forward to be working with Ian and the rest of the team, settling in and getting on with the season.


Leonardo Confident AC Milan Will Have A Good Campaign