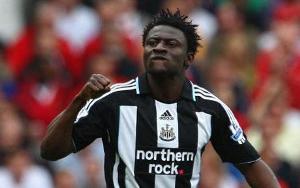 Interesting football news are out and it has been reported that Newcastle United striker Obafemi Martins has revealed that he wants to join German champions Wolfsburg.

The Nigerian international striker now appears to be unwilling to hang around at St James’ Park following the club’s relegation from the Premier League.

Martins also told local reporters that the Bundesliga will soon be the best league in the world and therefore the prospect of joining Wolfsburg excites him. He also added that he hope the transfer will materialize.

Martins would be hard-pressed to win a first-team place with Wolfsburg, whose front two of Grafite and Edin Dzeko scored 53 Bundesliga goals between them last term.