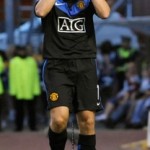 Manchester United manager Sir Alex Ferguson has revealed that striker Michael Owen must get used to life on United’s bench.

He also went on to say that Owen will play, but not early in the season as he is trying to get a blend of Berbatov and Rooney and therefore Owen doesn’t come in to the equation, yet.

Sir Alex also said that he had explained to Owen as to why he will not be involved. Fergie also said that the season has not really started because of the internationals.

It is believed that Owen is desperate to impress boss Fabio Capello to win back his England place but he has only started one United match since leaving Newcastle this summer.