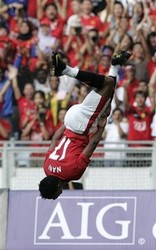 New signing Michael Owen scored on his Manchester United debut with what proved to be the winning goal as the Red Devils beat a Malaysia XI 3-2 in the Bukit Jalil Stadium in Kuala Lumpur.

England international Wayne Rooney and Portuguese winger Nani put the Premier League champions ahead, only for Amri Yahyah to score twice to peg them back before Owen came off the bench to net the winner after the break.

Rooney got United off to a flying start in the ninth minute after some terrible defending by Malaysia. An undemanding cross from the right hand side somehow evaded the entire Malaysian defence and Dimitar Berbatov’s shot forced a save that was parried into the path of Rooney to finish.

Twenty minutes later it was 2-0 when Portuguese winger Nani coolly slotted the ball home after a similar error by the Malaysian back line, this time from the left hand side with Rooney making the assist.

As the first half was drawing to a close, Malaysian playmaker Amri scored a magnificent lob over Edwin van der Sar, who was standing some 10 yards off his line, to give the home crowd a lift going into the break.

Malaysia started the second half they finished the first, and it was Amri who struck again when he capitalised on a terrible error from substitute goalkeeper Ben Foster after what seemed like a simple pass back from Darren Gibson. Foster let the ball go across him inside the area and Amri pounced to level the score and bring the game back to life.

However, there was more drama to come as debutant Owen scored with five minutes remaining after a neat move found the former Liverpool striker on the edge of the box. He finished the move off by slotting the ball just out of the Malaysian goalkeeper’s reach to mark his arrival in style. 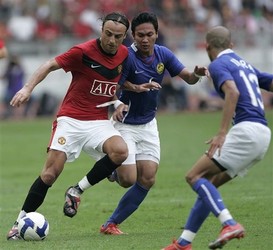