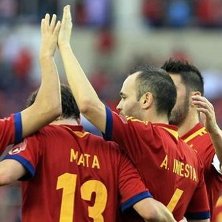 Spain cruised to a 5-1 win over Panama thanks to two goals from Pedro and further strikes from David Villa, Sergio Ramos and Markel Susaeta.

The world and European champions were 3-0 up by half-time after Andres Iniesta had teed up Pedro and Villa to slot home before Pedro produced a classy finish for his fifth goal in his last three internationals.

Ramos then thundered home a wonderful free-kick nine minutes from time and debutant Susaeta completed the scoring for the visitors with an easy finish from Jesus Navas’ cut-back.

However, the home fans were given something to cheer three minutes from the end as Gabriel Gomez dinked home a penalty after Cesc Fabregas had tripped Nelson Barahona.