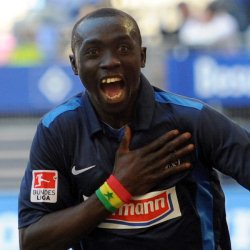 Papiss Cisse has declared that he is open to a move to the English Premier League.

The 26-year old Senegal international, who has previously been linked with Sunderland and Blackburn Rovers, revealed that if he does happen to leave Germany, he would love to play in England like his good friend Demba Ba.

However Cisse insists that there is also interest from other Bundesliga clubs and is unsure if Freiburg would want to sell him yet.

“My friend, Demba Ba, has done well there. All players love the premier league. One day I could be there, but there are also teams here (Germany) who want me so you never know.

“My club will have to decide to sell me, if not I will be here next season at least and I have to confirm my scoring ability.”