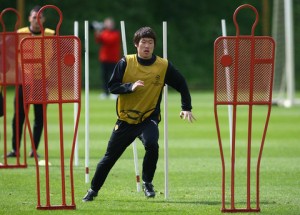 South Korean international midfielder Park Ji-Sung has reacted with delight to the news that he has officially signed a new two-year contract at Manchester United.

Park, now age 28, had been in discussions with the English champions over the summer as his previous contract was due to expire at the end of the 2009-10 season and now, the midfielder is tied to United until the summer of 2012.

Park told the club’s official website that he is so pleased to have the new contract and that he is really enjoying his time at Manchester United. He also added that he appreciate all that Sir Alex and the staff have done for him, but also added that the fans support were incredible.

Park added that Manchester United have achieved great success over the last four years and won many trophies and that it is a great experience for him to play at this magnificent football club along with other world famous players.

Park joined United from PSV Eindhoven in the summer of 2005 and has made 86 Premier League appearances for the club, impressing with his work-rate and enthusiasm.