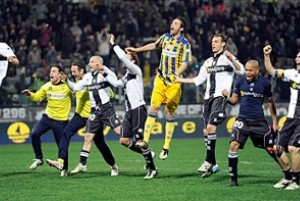 Milan, who had clawed their way back into the Scudetto picture and were just a point off leaders Inter heading into tonight’s round, are now four behind their rivals after slipping up at mid-table Parma.

Leonardo’s side dominated the play throughout but failed to produce many clear chances before Bojinov came off the bench to tap in a dramatic winner for the home team.