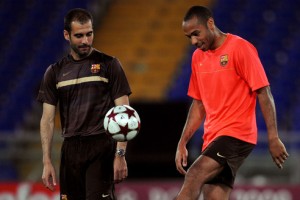 Sensational news are out and it has been reported that Barcelona coach Pep Guardiola has fallen out with his French striker Thierry Henry.

Spanish newspapers have reported that Guardiola has lost confidence in Henry, who has been missing for the past two weeks due to injury.

It is believed that the Barcelona coach is delighted with young striker Pedro’s form in the absence of the former Arsenal captain and all signs are that he will back the 22 year-old even when Henry returns to full fitness.

French international striker Henry is expected to leave Barcelona at the end of the season, but it could be sooner in January if the right offer arrives.