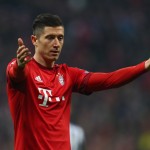 Reports are out claiming that Bayern Munich coach Pep Guardiola wants to take Robert Lewandowski with him to Manchester City.

The Daily Star Sunday revealed that the Poland international star has been watched closely by Manchester United this season.

They tried to sign him last season and had pondered a move to renew their interest.

However, the Sunday Express reports Guardiola wants Lewandowski to line up alongside Sergio Aguero as part of a potent new strike-force.

Bayern will demand a huge fee for their prized asset but that won’t put off City’s mega rich owners.

It’s claimed they are unlikely to flinch at the prospect of splashing out £60m to take him to the Etihad.