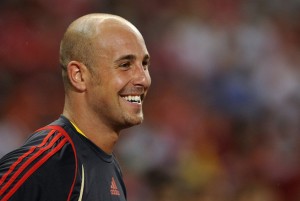 It was reported that Rafa Benitez has been desperate to get the future of his influential goalkeeper sorted out and he will be delighted that talks with Reina’s advisors have now reached a successful conclusion.

Signed from Villarreal in the summer of 2005, the Spanish international has been one of Benitez’s biggest success stories and is currently on course to win his fourth ‘Golden Gloves’ – the Premier League award for most clean sheets in a season.

There has never been any suggestion that Reina, 27, was looking to move away from Anfield – on more than one occasion he has reiterated his commitment to the club – but Benitez wanted him to have a deal that recognised his standing.

That is now the case and once Reina returns back to Merseyside following Spain’s friendly with France tomorrow night, the formalities of putting pen-to-paper on the contract that will take him through to the end of 2014-15 campaign.