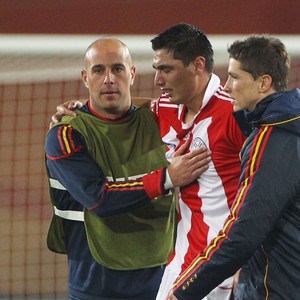 Bad news for all Liverpool fans as reports have emerged that Liverpool goalkeeper Pepe Reina is keen to depart the club as early as January.

It has been reported by Mirror Football that the Spaniard has told Reds boss Roy Hodgson he wants out and to start searching for replacements.

The rumour has been circulating for some time now and the final outcome will only be known come the winter transfer window.

However the murmurings are rife and the fact that Liverpool are supposedly seeking out an alternative proposes that a move is imminent.

Manchester United, Arsenal and Inter Milan are reported to be interested in Reina whilst the Reds have targeted Schalke’s German international Manuel Neuer and Ajax’s Dutch number one Maarten Stekelenburg as his potential replacement.