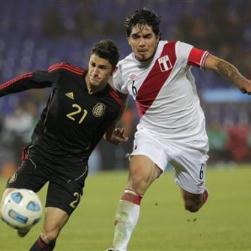 Paolo Guerrero ensured Peru avoided a frustrating draw as he scored with seven minutes remaining to give his side a 1-0 victory over Mexico in Group C of the Copa America.

Peru, who secured an impressive 1-1 draw with Uruguay in their opening game, wasted a host of chances in Mendoza as Juan Vargas twice struck the woodwork in the second half and Guerrero failed to score with two excellent headed chances.

However, the Hamburg striker was alert to convert when unmarked after 83 minutes with his goal ensuring that Peru are joint top of Group C with Chile after both countries secured four points from two games. Uruguay are in third with two points, but Mexico sit bottom after two defeats.