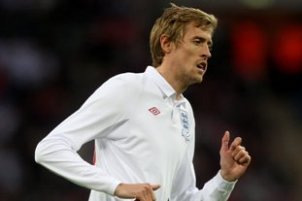 Tottenham striker Peter Crouch could get the nod to start for England against Belarus tomorrow night.

It is believed that Fabio Capello wants another look at the striker with Emile Heskey likely to make way.

However it is also said that struggling Steven Gerrard is unlikely to start, while Aaron Lennon and James Milner are set to play on the flanks.

Capello is also expected to keep faith with central defender Rio Ferdinand, despite his recent mistakes and the Manchester United defender got a big thumbs-up from his old pal Frank Lampard.

Lampard said that Rio Ferdinand and John Terry have been the most consistent central defenders in Europe over the last five years.

Rooney : I Want To Win The World Cup!