It has been revealed that Arsenal keeper Petr Cech admits that Sunday’s 2-0 defeat to second placed Tottenham has left the Gunners Champions League hopes in real doubt. 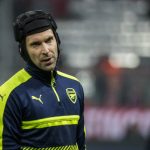 The Gunners remain sixth, five points behind Manchester United and six back on fourth-placed Manchester City ahead of their clash with United at the Emirates next weekend.

Cech told Arsenal’s official website : “I feel angry and disappointed because obviously this is not a game we wanted to lose and this is a very big disappointment for us,”.

“Obviously, we are very disappointed because it’s a north London derby, it means a lot to the fans and it meant a lot to the club, to us. We needed three points and in the end we have none.”