Reports are out claiming that Bayern Munich captain Philipp Lahm has hit out at wantaway teammate Mario Mandzukic. 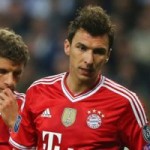 With Arsenal, Chelsea and Manchester United keen, Mandzukic wants out of Bayern after being dropped for the German Cup final.

It is said that Mandzukic flew home this week to Croatia and missed the club’s end of season celebrations.

“It is a shame because each player and the club would have preferred that each player is there and to celebrate with the team. Mario was a part of it, shame he was not there,” said Lahm.

“I have to accept it, I have no other choice. But I think it’s nice that players like Holger Badstuber are with us and celebrates with us. He didn’t play, but pushed the team. That’s what team players should do I imagine in a team sport.”