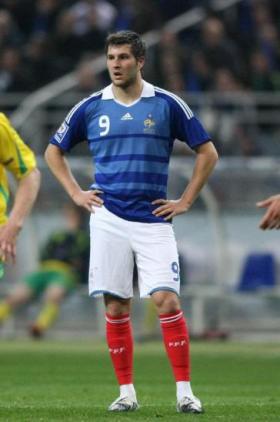 In the 2008-09 season, Gignac’s form blossomed as he became first-choice striker due to the departure of Johan Elmander to Bolton Wanderers. He scored his 1st goal of the season in just the second match against Le Havre with an 88th minute strike to seal a 2–1 victory. Over the course of the season, Gignac scored several vital goals for his club notably braces against Sochaux, Grenoble, Saint-Étienne, Marseille, and Nice twice, including his most recent 23rd and 24th goals. He overtook Elmander (Toulouse’s top scorer last year with 11 goals) during the 19th match.

For his efforts, he was awarded the UNFP Player of the Month award twice for September and March, as well as being nominated for the Ligue 1 Player of the Year Award, which was won by Yoann Gourcuff. Gignac was also selected to the Ligue 1 Team of the Year, and received the Trophée du Meilleur Buteur for being the league’s top scorer.

Gignac received his first international call up for France for World Cup qualifiers against Lithuania. He missed the first match due to injury but was fit enough to earn his first cap on 1 April 2009, coming on as a substitute in the 69th minute and provided the assist to Franck Ribéry’s goal in the 1-0 victory. On 12 August 2009, Gignac scored France’s lone goal after 42 minutes against last-place Faroe Islands in a Group 7 World Cup qualifier in Tórshavn.