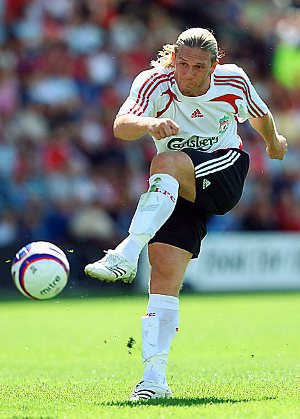 Andriy Viktorovych Voronin was born on 21st of July 1979 in Odessa and is a Ukrainian international footballer, who plays for Liverpool, having been on loan to Hertha Berlin. He usually plays as a striker, but can also play on the wing. His previous clubs include Chornomorets Odessa, Borussia Mönchengladbach, Mainz 05, Koln and Bayer Leverkusen.

In the 2002-03 season, Voronin became top goalscorer in the 2nd Bundesliga. At international level he has frequently been played in midfield.

While at Mainz, Voronin was called up initially to Ukraine’s Under-21 team and in January 2002 to the national team, at the age of 22. He made his international debut in a 4-1 friendly defeat to Romania in March 2002, however was dropped after that, with coach Leonid Buriak explaining: “I’ve been to Germany twice to watch him and made a conclusion Andriy cannot compete with Shevchenko, Rebrov and Vorobei as a forward. He can play in midfield as well but he still has to improve some aspects of his game. Anyway, we count on Voronin especially considering his young age.

Voronin was ultimately recalled to the national side, scoring his first international goal in a 2-0 Euro 2004 qualifying win over Greece in September 2002 and a second one in a 2-2 draw against Spain in March 2003.

He was in the Ukrainian squad for the FIFA World Cup 2006, in which Ukraine got to the quarterfinals, where they were knocked out by the eventual winners, Italy.