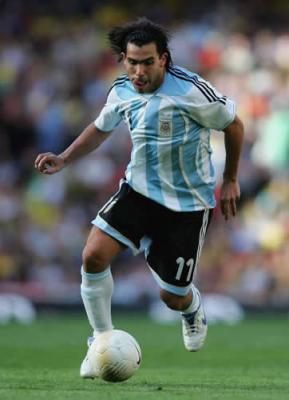 Carlos Alberto Tévez is an Argentine footballer who currently plays for Manchester City and the Argentina national team. He was described by Diego Maradona as the “Argentine prophet for the 21st century”. Tevez plays as a striker.

Tévez has a distinctive burn scar that runs down his neck from his right ear to his chest. He was accidentally scalded with boiling water as a child, which caused third-degree burns and kept him hospitalized in intensive care for nearly two months. After joining Boca Juniors, Tévez refused an offer from the club to have them cosmetically improved, saying that the scars were a part of who he was in the past and who he is today.