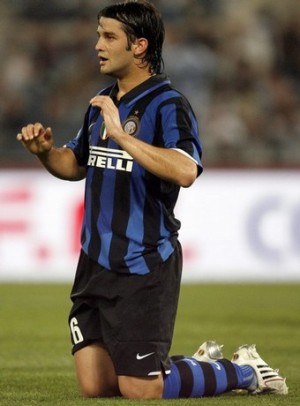 Cristian Eugen Chivu was born on October 26, 1980 in Resita and is a Romanian international footballer. He is the captain of the Romanian national team and currently plays for Internazionale of the Italian Serie A.

On 25 March, 2008 he was decorated by the president of Romania, Traian Basescu, for the results on qualifying to UEFA Euro 2008 with Medalia “Meritul Sportiv” (The Medal “The Sportive Merit”) class III.

Chivu can speak Italian, Dutch and English as well as his native Romanian. He is currently married to Adelina Elisei. According to Calcio Italia magazine, Chivu has been involved in opening football schools around Romania for the past few years, and he said “I hope that he is proud when he looks down on me” in reference to his late father who was a youth coach.

On February 12, 2009, his wife Adelina gave birth to their first child, a daughter named Natalia.