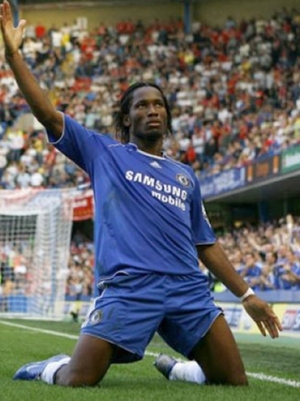 Didier Yves Drogba Tébily was born on 11 of March 1978 in Abidjan, Côte d’Ivoire and is an Ivorian footballer who plays as a striker. He currently plays for the Côte d’Ivoire national football team as well as Chelsea in the English Premier League.

Drogba moved to Chelsea for a record breaking fee of £24 million and helped the club win their first ever Premier League title. In addition, Drogba also scored decisive goals in the 2005 FA Community Shield and League Cup Final. Drogba came to prominence as one of the world’s foremost strikers in 2006 as he won the league title with Chelsea again and captained the national team for the first time.

In the 2006 World Cup he scored Côte d’Ivoire’s first ever goal of the competition and he was chosen as the 2006 African Footballer of the Year. The next season he finished as top scorer in the 2006–07 Premier League with 20 goals and also scored the winning goal in the 2007 FA Cup Final.

Away from the pitch, Drogba is known for his charity work and was appointed by the United Nations Development Programme as a Goodwill Ambassador in 2007. He has three children with his wife a Malian wife Alla.