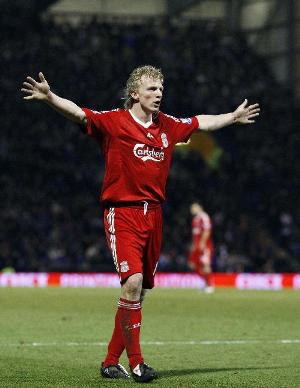 Dirk Kuijt, commonly known as Dirk Kuyt was born on 22nd of July 1980 and is a Dutch professional footballer who currently plays for English club Liverpool. He is renowned for his work-rate in his primary position as a forward, but now he is more often deployed as a winger for both Liverpool and the Netherlands national team.

Kuyt’s wife Gertrude has found favour in the Dutch media for her down-to-earth attitude. She continued to work as a nurse in an old people’s home after marrying Kuyt until their daughter, Noelle, was born.

Kuyt and his wife now carry out extensive charity work off the pitch. Most notably, he and his wife set up the Dirk Kuyt Foundation to help disadvantaged children in his homeland and the Third World.

One of the ways the foundation raises money is by selling DK-branded clothes. The couple have two sons Roan, born 11 April 2007 and Jordan.