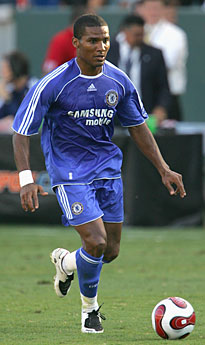 Florent Johan Malouda was born on 13th of June 1980 in Cayenne, French Guiana and is a French international footballer currently playing as a left winger for Chelsea in the Premier League and the French national team. He is a left winger who can also play as a second striker or behind the front two.

Florent Malouda signed for Chelsea in July 2007 after beating off stiff competition from around Europe including and Real Madrid. The French winger joined Chelsea from Lyon for an undisclosed fee said to be within the £13.5 million mark. He joined them on a four and a half year deal.

Malouda made his debut for France on 17 November 2004 in a match against Poland. He then became a regular for his country, scoring his first goal for his country on May 31, 2005 against Hungary.