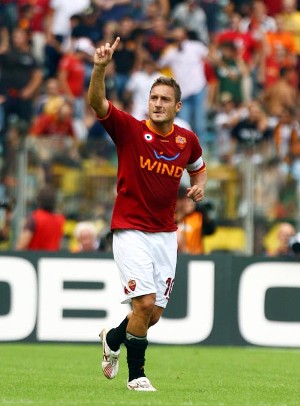 Francesco Totti, was born on the 27th of September 1976 and is an Italian World Cup-winning footballer who currently plays for Italian Serie A club Roma. His position is that of a striker or an attacking midfielder, though he is best known for playing as a second striker. Totti, who has spent his entire career at Roma and is the number-one goalscorer and the most capped player in the club’s history.

He is currently the top active Serie A goalscorer, and 9th all-time in league history with 178 goals.

Totti’s wife, Ilary Blasi, is a former showgirl who currently works as commentator and host on several Mediaset TV programs. The couple had their first baby, named Cristian, on 6 November 2005. Their second child, a daughter named Chanel, was born on 13 May 2007. His brother Riccardo serves as his agent.

A goodwill ambassador for UNICEF, Totti published two bestselling, self-effacing joke books in order to raise money for a children’s charity. Some of the jokes were filmed as shorts starring Totti himself, along with some of his Italy teammates such as Alessandro Del Piero, Gianluigi Buffon, and Antonio Cassano.