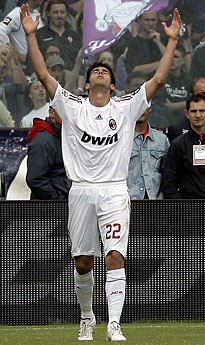 Ricardo Izecson dos Santos Leite, best known as Kaká, is a Brazilian footballer who plays as forward and midfielder for Italian Serie A club A.C. Milan and the Brazilian national team. He was the recipient of both the Ballon d’Or and FIFA World Player of the Year awards in 2007, and was named in the 2008 and 2009 editions of the Time 100.

As of February 2009, Kaká and Internazionale striker Zlatan Ibrahimovi?, both of whom play in Serie A, are the highest salaried football players in the world.