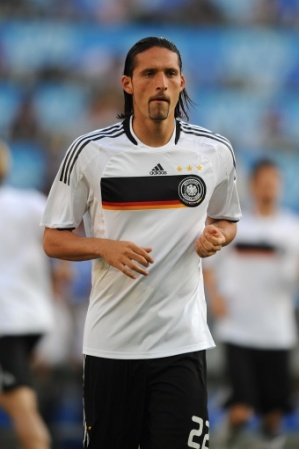 Kevin Dennis Kurányi was born on the 2nd of March 1982 in Rio de Janeiro, Brazil and is a German international footballer who currently plays for the Bundesliga club Schalke 04. He’s natural position is playing as a striker and possesses aerial ability and finishing skills.

He was born in Brazil to a German-Hungarian father and a Panamanian mother. Kuranyi’s favorite club is CR Flamengo. He can speak English, Portuguese, German, and some Spanish and Hungarian. He eventually opted to play for the German national football team after being qualified to play for Brazil, Hungary and Panama.

Kuranyi made his debut for Germany during the Euro 2004 qualifier against Lithuania on 29 March 2003. In his third appearance, the young striker netted Germany’s final qualifying goal in their 3-0 rout of Iceland. He played for his adopted country at the tournament’s finals and at the 2005 Confederations Cup but, because of his under achievements in the season of 2005–06, was not nominated for the 2006 World Cup in Germany.

In 2006–07 he regained his form. After an absence of 15 months he was therefore recalled to play for the national team, scoring during Germany’s 3-1 win against Switzerland on 7 February 2007, in a friendly in Düsseldorf. In Germany’s Euro 2008 qualifying match against the Czech Republic on 24 March, he scored both goals in the 2-1 victory. He was brought on during the second half of the Euro 2008 final against Spain for Thomas Hitzlsperger, but was unable to help the Germans score in the 0-1 loss, receiving a yellow card in the process. Incidentally, the appearance in the final marked his 50th cap for Germany.

On 11 October 2008 Kurányi was left out of the 18-man squad to face Russia. After watching the first half from stands with the other unselected players, he left the stadium during the half-time interval and failed to return to the German team hotel. After this incident, German team coach Joachim Löw said that he would never again select Kurányi for the national team. One of his advisors said of the incident to reporters, “He decided what he for himself found to be right, which was to say I’m going home.”