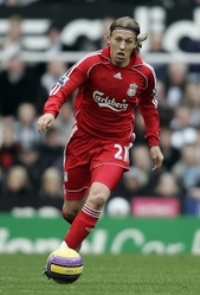 Lucas Pezzini Leiva was born on the 9th of January 1987 in Dourados, Mato Grosso do Sul and is a Brazilian international footballer who currently plays as a midfielder for Premier League club Liverpool. He is often known solely by his first name, Lucas. He is the nephew of former Brazilian footballer Leivinha.

Lucas started his career with Grêmio, making his first team debut on 22 October 2005 in a 1–0 win over Náutico in Serie B. Grêmio went on to win the league that season, with only seven players on the field, returning to the top tier of Brazilian football.

His form in 2006 led to reported interest from many major European clubs including offers from top Spanish clubs and Italian club Inter Milan. It was Liverpool that proved most attractive to the player, and on 13 May 2007 the club confirmed that they had signed the player from Grêmio before the start of the 2007–08 season. The transfer fee was in the region of £6 million. Lucas remained with Grêmio until the end of their 2007 Copa Libertadores campaign.

On 3 May 2009 Lucas scored his first Premier League goal for Liverpool against Newcastle United in a 3-0 win.