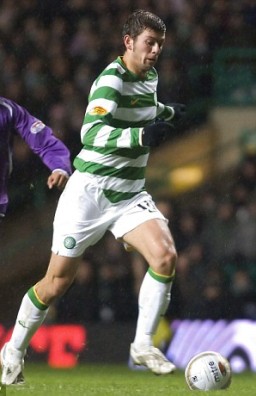 Massimo Donati was born on the 26th of March 1981 and is an Italian football midfielder currently playing for Bari.

Donati is a central midfielder and started his career at Atalanta and moved to AC Milan in 2001 for £10 million. However, due to the competition at the club, Donati was unable to claim a first team place, spending the 2002/03 season on loan at Parma and then Torino.

Despite finding his form at Messina, Donati still found himself out of favour at Milan and was sent again on loan for the 2006/07 season, this time to his first club Atalanta.

On 29 June 2007, Celtic confirmed the 3 million euros signing of Massimo Donati on a 4 year contract and was unveiled at Celtic Park. Donati was given the number 18 jersey, vacated by ex-captain Neil Lennon

On 27 August 2009, Donati signed a 4-year contract with Serie A newcomers AS Bari.