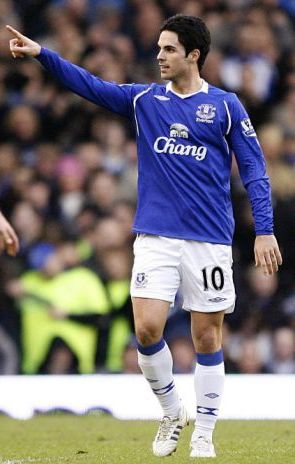 Mikel Arteta Amatriain was born on 26th of March 1982 in San Sebastián, Gipuzkoa, Spain and is a Spanish international footballer. He is a midfielder, currently playing in the English Premiership for Everton.

Arteta’s girlfriend is the former ‘Miss Spain’ Lorena Bernal. He is close friends with Xabi Alonso, who plays for rivals Liverpool. The two are neighbours in Liverpool’s Albert Dock apartment complex.

Arteta is multilingual, speaking fluent Spanish, Basque and Catalan. He speaks English and some French and Italian. He is also learning Portuguese.